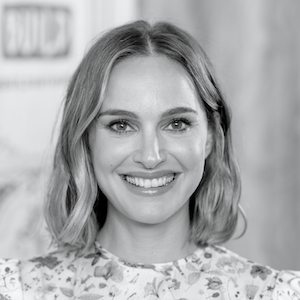 Natalie Portman is an Academy award-winning actress (BLACK SWAN), director, author, and activist. In Summer 2022, Portman was seen on the big screen with her return to the Marvel universe as ‘Jane Foster’ in THOR: LOVE AND THUNDER.

Previously Natalie appeared in Pablo Larraín’s film, JACKIE, in which she starred as First Lady Jacqueline F. Kennedy. For the role, Portman was nominated for an Academy Award, a Golden Globe, a Screen Actors Guild Award, a BAFTA Award, and won the Critics’ Choice Award. She wrote, directed, produced, and starred in A TALE OF LOVE AND DARKNESS, which made its world premiere at the 2015 Cannes Film Festival and its North American premiere at the 2015 Toronto International Film Festival. Other past film credits include Noah Hawley’s LUCY IN THE SKY and in Brady Corbet’s VOX LUX and Alex Garland’s highly anticipated second feature, ANNIHILATION.

Natalie and her producing partner Sophie Mas recently inked a first-look TV deal with Apple TV+ for their production company MounatainA. Through this deal, they are producing the Apple Original limited series LADY IN THE LAKE, which will be Natalie’s TV acting debut. MountainA is also producing the upcoming drama MAY DECEMBER from director Todd Haynes where Natalie will star opposite Julianna Moore. Natalie’s other past production credits include the documentary EATING ANIMALS, which she executive produced and narrated. The film examines mankind’s dietary choices and is based on Jonathan Safran Foer’s memoir.

In addition to her film work, Portman devotes her time to several humanitarian causes, with an emphasis on supporting women and girls. She is also a founder of National Women’s Soccer League team Angel City Football Club.

Portman is a Harvard graduate with a degree in psychology and studied at Hebrew University in Jerusalem.